The dyeing principle based on the fibre reactivity involves the reaction of a functional group of the dyestuff with a site on the fibre to form a covalent link between the dye molecules and the substrate.2

The four structural feature of a typical reactive dyes molecule are:

The general form of the reactive dye is as follows. 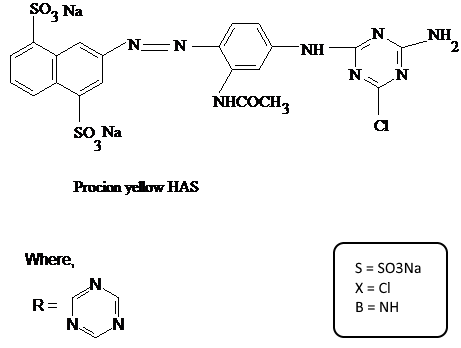 Chromophore (R):  It is the colour producing part. The Chromophore absorbs a certain wavelength of incident white light and reflects the rest, which incident on the eye retina giving colour vision.

Bridging group (B): Bridging group links R and X which determines stability and reactivity of the dye particle. In some, the reactive group is directly attached to the Chromophore and most reactive system contains a heterocyclic ring that contributes some substantivity for cellulose. The sulphatoethyl sulphone precursor of the vinyl sulphone reactive group contributes significantly to the aqueous solubility of reactive dyes.

Water solubility: This group imparts water to dye. Generally, it is sodium salt of sulphuric acid. One should always keep in mind that the easier is the application of the dye on the fibres the easier is the removal from fibres.