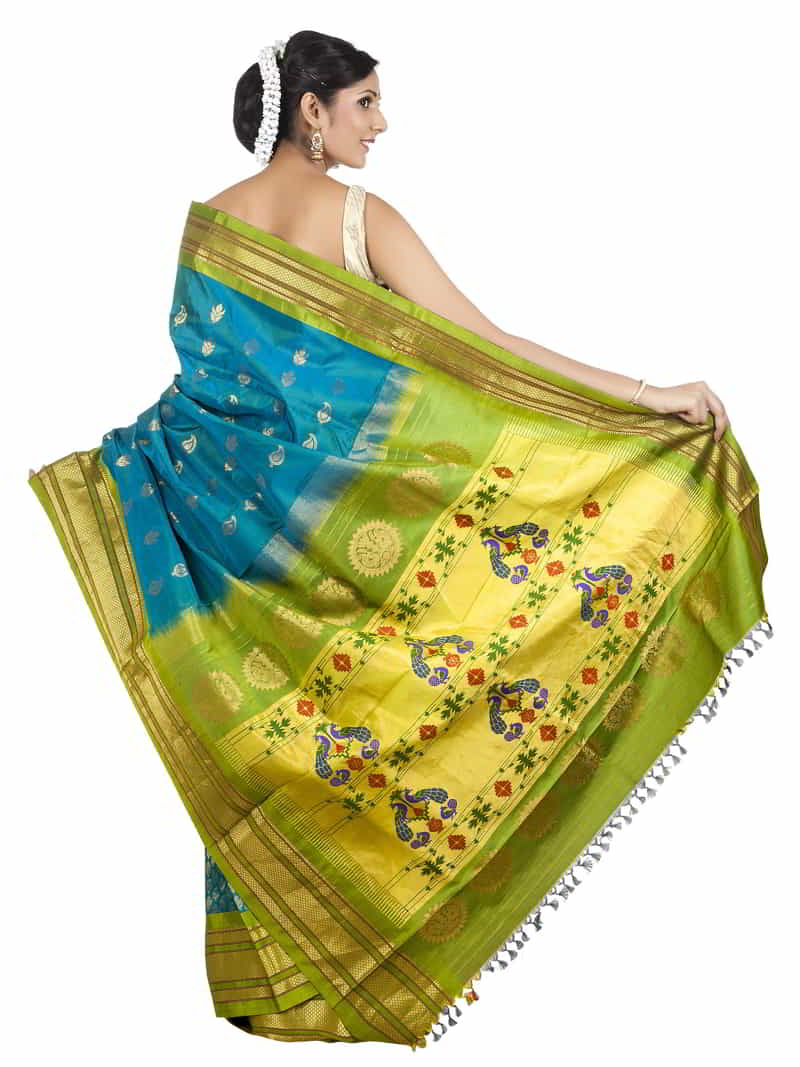 Region: Banarasi brocade saris are from Varanasi/Banaras, a small town in the state of Uttar Pradesh. The holy city of Banaras, on the banks of river Ganga, is considered to be the oldest city in the world. The brocaded fabrics from Banaras are considered to be one of the finest saris in India and are known for their gold and silver brocade or ‘zari’. These saris are made of finely woven silk, decorated with intricate design.
Technique: The designs are produced by warp and weft threads of different colours and materials, suitably woven. Extra warp/weft or both are woven into the fabric. Pattern is woven with or without attachments like jacquard or dobby attachment or by jala weaving. It can be silk on silk, cotton on cotton, silk on cotton, zari on silk. The brocade designs are made with extra yarns other than the ground threads. These extra or supplementary yarns are usually inserted in weft wise direction in Banaras brocades. When these extra yarns are picked from selvedge to the other end, the yarns appear on the face of the fabric in the design portion and as floats on the back of the fabric in the remaining portion.

A very special technique often seen in Banaras is the ‘Minakari’. In this technique a motif is woven with an additional colour which stands out and resembles the enamelling in jewellery. The additional coloured yarns are slightly untwisted and hence appear raised.

Motifs: The most commonly used motifs are:

The designs are extremely fine and delicate. They have a strong Mughal influence. Motifs like intertwining floral and foliage (Jaal), paisley in a creeper (Kalka bel) and hunting scene (shikargah pattern) are often seen.

End Use: These textiles were popular items of export to European countries. Traditionally, banarasi brocades were used during Mughal period as fabrics for royal coats, achkans and jamas. Courts and palaces were adorned with brocade curtains, fabric fans, bolsters and foot stools, upholstered with brocades. Brocade saris, dupattas and dress fabric were worn by women on special occasions, mainly on weddings and festivities.

In recent times, Banarasi brocades are being widely used to make dresses/kurtis for women, bags and other accessories. Lately home furnishings in brocades are also made to give a look of grandeur to the room. Even now, it’s a must to have a Brocade sari in trousseau for every Indian bride.

Region: Baluchari saris are beautiful ornate saris mainly produced in Murshidabad district of West Bengal. Baluchari sari is distinctly different from other saris of India, as it commemorates the Nawab and his wife by depicting them on the pallu of the sari.

Technique: Making of the motifs for pallu and other part of Baluchari sari is an intricate process. Earlier, Baluchari saris were made on jala looms which were gradually replaced by the modern jacquard technique. Traditionally the motifs were woven on handlooms, using softly twisted extra weft yarns which used to give a plump, embroidered effect. Zari is not used for extra weft ornamentation Now a days, jacquard attachment is used for weaving patterns on the sari. The design is drawn on a graph paper; it is coloured and punched on the jacquard cards. After punching, these cards are put in order and fixed in the jacquard machine on top of the loom.

Motifs: The pallu of the Baluchari sari is special as it is divided into niches bordering a square or rectangular space in the center. In each of the niches, a human figure is depicted, normally a king smoking a hookah or a queen with a fan or smelling a flower. A row of three, five or seven ornate paisley (kalkas) are seen in the centre of the pallu, around which niches with human figures are woven.

The Baluchari saris are often reckoned with the patterning of sun, moon, stars, mythical scenes and motifs of natural objects. The field of the saris are embellished with small butis. Colours like maroon, blue, red and dull dark terracotta were used as the base colour. Ornamentation of butidar Baluchari saris is done with extra weft motifs in off-white, white, yellow and dull orange coloured yarn.

These saris were mostly worn by women from upper class and zamindar households in Bengal during festive occasions and weddings.

In recent times, scenes from Ramayana and Mahabharata are depicted on Baluchari saris as motifs. Colours have become brighter and polychromatic. Zari yarns are also used for ornamentation.

Region: The Jamdani saris are from West Bengal. These are sheer, delicate saris woven in Phulia, Nadia and Shantipur villages. These are made in combination of cotton with cotton, cotton with silk and silk with silk.

Technique: The technique of interlocking the extra weft yarns for creating motifs in the fabric is used in Jamdani saris. These are woven on traditional handlooms.

Motifs: Floral geometric creepers, paisleys and leeves are the most common motifs in the Jamdani saris.

Motifs: Bright jewel tones such as emerald green, ruby red and yellow coloured silk yarns were used, however midnight blue coloured saris were most preferred. The interlocking technique created geometric angular forms out of patterns which were floral, paisleys, parrots, peacocks and lotus flowers. The pallu used to have a broad band of zari. At present the pallu band is ornamented with lotuses and peacocks woven in very bright colours. Another motif seen on Paithani saris is the bird (munia) motif.

Paithani is coveted in India as a precious heirloom passing on from generation to generation. Exquisite silk from Paithani was exported to many countries and was traded in return for gold and precious stones.

Region: Kanjeevaram saris hail from the town of Kanchipuram in Tamil Nadu. It is considered to be one of the most expensive saris in the world and thus used for all special occasions.

Region: Chanderi, near Gwalior, in Madhya Pradesh is renowned for its woven saris appropriate for summer wear. The craft is practised by muslim Ansari weavers.

Technique: The sari is woven in a blend of cotton and degummed silk. It is diaphanous and is woven in pastel colours with small buties and a narrow gold border. The pallu generally has fine lines in zari yarn. The motifs are very simple. Some examples are gold coin (asharfi), mango, brick (eent) and rosary beads (rudraksha) in the form of small buties.

Technique: The sari is woven with cotton weft and silk warp which is dyed on loom. It can be plain, tone on tone with a striped or checked border. It has three decorative bands/ borders of zari on the pallu. The colours are very varied but the most popular are the native haldi-kumkum combination (yellow and red) and sabz (vegetable) colours.