Weaving looms can range from quite simple to very complex. Looms have been used to produce cloth for thousands of years, and while technology has improved the loom, the basic strategies and practices remain much the same. Understanding the parts of the loom can help you learn to weave or simply learn a bit more about how weaving works.

Passage of Material through Loom 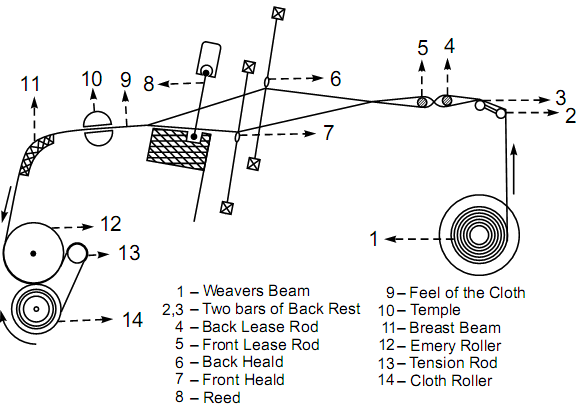 At the point 9 is what is known as the ‘Cloth fell’. It may be considered as the point where the warp and weft become cloth because it is at this point where the last pick of weft, which was left by the shuttle, becomes beaten up. Passing forward, the cloth is held at each side by a temple 10 which holds the cloth fell out to the width of the warp yarn, in the reed. From the temples, the cloth passes over the breast beam/front rest 11, partly around the sand or emery roller K, over the steel roller, or tension rod L, and then on to the cloth roller M.

It is made of wood and consists of the sley race or race board, reed cap and metal swords carried at either end. The sley mechanism swings to and fro. It is responsible for pushing the last pick of weft to the fell of the cloth by means of the beat up motion. The sley moves faster when moving towards the fell of the cloth and moves slower when moving backward. This unequal movement is known as ‘eccentricity of the sley’. It is needed in order to perform the beat up and also to give sufficient time for passage of shuttle to pass through the warp shed. The beat up of the lastly laid pick of weft is accomplished through a metal reed attached to the sley.

It is basically a weft carrier and helps in interlacement of the weft with the warp threads to form cloth. The shuttle which is made of wood passes from one end of the loom to the other. It travels along the wooden sley race and passes between the top and bottom layers of the warp sheet. The shuttle enters a shuttle box fitted at either end of the loom, after passing through the warp shed. A shuttle normally weighs about 0.45 kgs.

It is the housing for the shuttle and is made of wood. It has a spindle and a picker. It may also accommodate the picker without a spindle. The top and side of the box towards the sley race are open. The shuttle dwells inside the box for the intermediate period between two successive picks.

The picker is a piece made either of leather or synthetic material. It may be placed on a spindle or grooves in the shuttle box. It is used to drive the shuttle from one box to another. It also sustains the force of the shuttle while entering the box.

It is a metallic comb that is fixed to the sley with a reed cap. The reed is made of a number of wires and the gap between wires is known as dents. Each dent can accommodate one, two or more warp ends. The count of the reed is decided by the number of dents in two inches. The reed performs a number of functions which are enumerated as follows:

This is also known as the weaver’s beam. It is fixed at the back of the loom. The warp sheet is wound on to this beam. The length of warp in the beam may be more than a thousand meters.

It is also known as the front rest. It is placed above the cloth roller at the front of the loom and acts as a guide for the cloth being wound on to the cloth roller. The front rest together with the backrest helps to keep the warp yarn and cloth in a horizontal position and also maintain proper tension to facilitate weaving.

It is also known as the cloth roller. The woven cloth is wound on to this roller. This roller is placed below the front rest.

The more harnesses or shafts a loom has, the more design possibilities you will have. Most larger looms have four harnesses, and table looms often only one; however, looms up to 16 harnesses are available.